my wife went to kansas city to visit her older sister. i stayed back with the boyz. one night, we headed out to a local county campground, flowing lake. we’ve been there before. it’s a quick escape and has a nice feel to it. for just a little while, i can feel just a little less depressed.

upon arriving, we got our bearings and got our humble campsite setup. 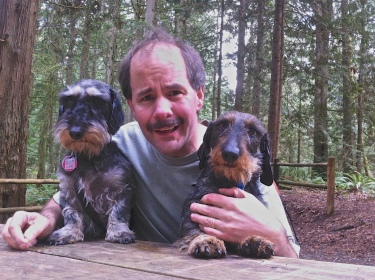 lookin’ cute at the table 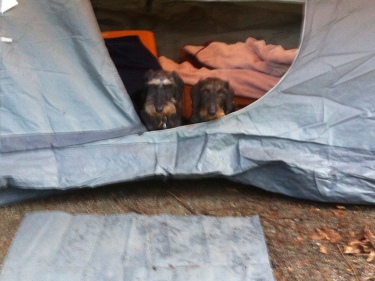 this is were we sleep tonight? were’s the queen sized bed??

after that, we headed out for an afternoon walk and saw such things as this. 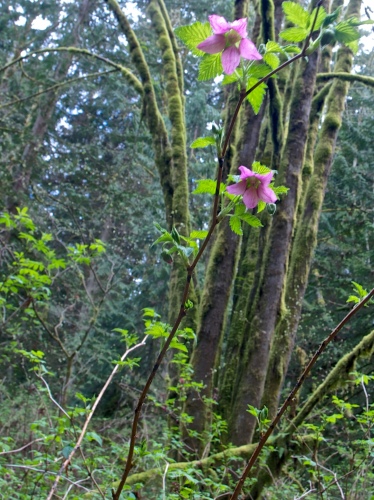 I enjoy this time of year. the salmon berry blossoms are so much more delicate than the other flowering berries, especially the black or himalaya berries.

after getting back to the campsite, dad futz with the fire. the firewood had been seasoned for nearly two years, but still a little wet from recent rains. that made it all the more challenging. eventually, the boyz got bored. nothing like a stick to keep then entertained.

we got bored so papa gave us sticks

papa continue to futz, then he saw the boyz dinner time had past! maybe that’s why they were eating stick! whoops! papa forgot the dog bowls. guess a newspaper… 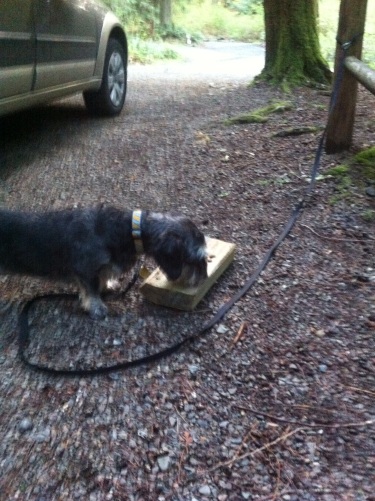 …will have to do!

papa had dinner himself and finally got the fire going well enough to produce heat.

the sounds of our fire

we ran out of wood, let the fading fire burn down and headed off to bed.

jimmy sleeps cool, so he joined me in the sleeping bag. sherlock sleeps warm, so he either slept on a nearby blanket or the crook of my bend legs. for almost the entire night, we had the frogs serenading us.

at one point, the frogs had pretty much settled down, the chirping nearly disappearing. i heard a train whistle in the distance. the frogs did, too. i think they were afraid they were about to be run over, because there croaking kicked up a notch or two. I think they responded similarly to the who’s is horton hears a who, “we are here! were here! we are here!”

things that go bump in the night, or howl. whats the difference.

at some point, early in the night, we heard what could best be described as a banshee cry. if you have seen the movie up, it sounded kinda like kevin, the bird calling for his lost birdettes. jimmy, being the curious type, wanted to go check it out.  i would have none of that since he is my protection. in a few minutes, i got him to settle back down.

later on, we heard yet another sound, it started as a load crackle, following by natural crashing sound, followed by a swoosh. somewhere near the beginning of it, i figured a tree had pick that time to topple. kinda strange since no breeze of any kind existed. I remember early on in the sound stream thinking, “man that’s close! I hope that doesn’t land on my tent!” thankfully, it didn’t. again, jimmy, being the curious type, wanted to go check out what made that sound.  i would have none of that since he is my protection. in a few minutes, i got him to settle back down.

evening came and morning followed, the next day

i knew dawn couldn’t be that far away, when the birds greeted me with their  varied calls. they wake up and first light and let everyone and anyone know it’s about time for the sun to come up.

eventually, we had to get up, too. we went on a morning walk. we couldn’t find the tree that nearly smashed our tent; it must have been further away than i thought. now, you might be thinking i must of hallucinated about hearing the tree fall. if i did, jimmy hallucinated at the exact time as me as he too jumped to attention at the sound.

i also got some more pictures:

a common occurrence around here, young trees grow on a stump using the nutrients of the decaying old tree.

go to my flowing lake album to see more pictures.

eventually, my time there came to an end. i packed up and headed for home. it ended up being a brief respite from my current nemesis, mr. depression. on my way home, unfortunately, i felt my thick fog beginning to return. i am thankful for my short get away lifting the currently dark mood if only for a brief time.